Solution home Troubleshooting Areola (Too Much) in Flange

Too Much Areola in Tunnel Print 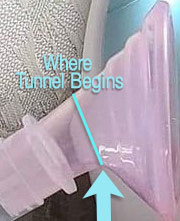 It doesn't matter where the areola is in our flanges!

Their angled design makes it hard to tell where the tunnel starts, so it can look like too much areola being pulled into the flange, as shown in this first picture.  But even if the areola is in the flange too far, it doesn't actually matter because the areola doesn't affect milk removal.

The real question is where the nipple is in the tunnel

The following three nipple position factors have a direct effect on how much milk can be removed:

1)  How deep is the nipple in the tunnel? 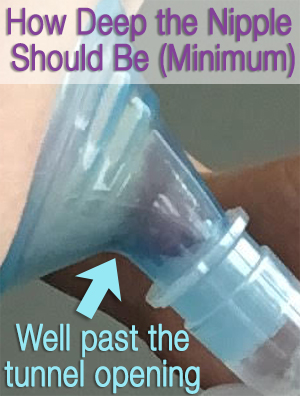 The nipple should be well past the opening of the tunnel as shown in the picture to the right.  It's fine if it goes past the collar ring.

If you're not getting your nipple in that far, try turning back the flange another quarter inch as you put it on and also turn up the vacuum a bit.  See also Getting Deeper in Silicone Flanges.  If that doesn't help, reach out to our inhouse lactation consultants.

2)  How much is the nipple moving?

If you're using our silicone flanges to control elasticity, which means using them without any lubrication, you should see the sides of the nipple staying in contact with the sides of the tunnel.  If not, the usual culprit is lubrication still coming in from somewhere.  See Lubrication Source Checklist

3)  How much is the nipple stretching in the tunnel?

If you're using lubrication because you're not controlling for stretching but your nipples are stretching significantly past the collar ring, working away from lubrication to control the stretching may be more comfortable and possibly result in more milk.

Did you find it helpful? Yes No

Send feedback
Sorry we couldn't be helpful. Help us improve this article with your feedback.